The Word of the Week is being brought back by popular demand!

The contest made its debut in summer 2007, with many staff members actively involved as participants.

Every Wednesday a new word will be made available. It's your job to use this word in a creative way. In 2007, the judges asked that the word be used in a sentence, but you library folk proved to be much more clever! We received poems, prose, letters - you name it!

The entries are judged based on originality and creativity. Entries must be submitted via email to smu.wow@gmail.com by 3pm on Tuesday.

The winning entry will revealed on this blog the following day (Wednesday), and the winner will be awarded a prize - including the much-coveted Word of the Week trophy. Serious bragging rights, people!

If you're looking for ideas, inspiration, or nostalgia, swing by Shannon's desk and take a peek at past entries in the Word of the Week binder.


We look forward to your submissions, and good luck!

This Week's Word is: Abecedarian

Of or pertaining to the alphabet; marked with the alphabet; arranged in alphabetical order, as abecedarian psalms, like the 119th.

Posted by The Humble Judges at 3:21 pm No comments:

garrulous, adj.
Given to much talking; fond of indulging in talk or chatter; loquacious, talkative.

here is how I feel about the word garrulous. 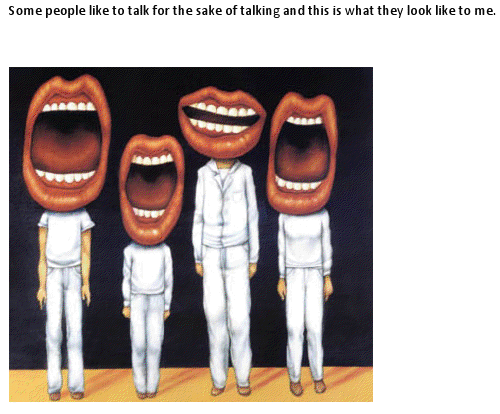 Garry, now he was a talker.
No man could bend your ear
So far,
so long,
so intently.
They said he could charm
The birds out of the trees,
But he preferred  to try
His luck
on birds
studying in the Library.
It might have been cute
His efforts to strike a date
With Sophia
or  Michelle
or Zalentha
But Garry was a talker
At top volume, regardless
Of who was studying
Or sleeping
Or reading nearby.
It got so bad that we had
A Garry patrol, that went around
Saying Garry, less
Garry, less
Garry, less!

AND THE WINNING ENTRY IS....

Posted by The Humble Judges at 3:18 pm No comments:

This Week's Word is: Garrulous

adj.
Given to much talking; fond of indulging in talk or chatter; loquacious, talkative.
Posted by The Humble Judges at 3:15 pm No comments:


I have to start out by saying this was the toughest week ever; we were blown away by your entries! We would have liked to let you all win, but figured that decision would impede the intense competition we have going on and decided we had to pick just one. It was so tough we had to bring in a guest judge to help decide. Each entry deserved to win based on different criteria, but in the end we decided to award the coveted trophy to the entry that was the most unique. If only we had three trophies!

I tried to rhyme anfractuous
(a project somewhat fatuous)
The task was so circuitous
that anyone more trepidous
would fall upon their thesaurus
in weeping, deep and sonorous.
Yet, every challenge new to us
Makes our vocab more omnibus.

But guess what Trish?
We are both amateurish
With Doug back in town,
Bridgit throwing down
(And Nancy’s getting fancy)

Our hides will be tan
If we hear from Nawaf, Amber or Dan
Carol would be dangerous,
Our road is so anfractuous!

So let us end our agonies
Combine our strategies
How about changing gear
And just go drink beer?

As I was pursuing my anfractuous way
to work, I espied an afractuous policemen
providing an anfractuous explanation to
an older driver who was growing increasingly
anfractuous.

Or in other words:

Wending to work
I did espy
the craggy cop
through imprecision
trying to win over
an old fart driver
who thought him a jerk. 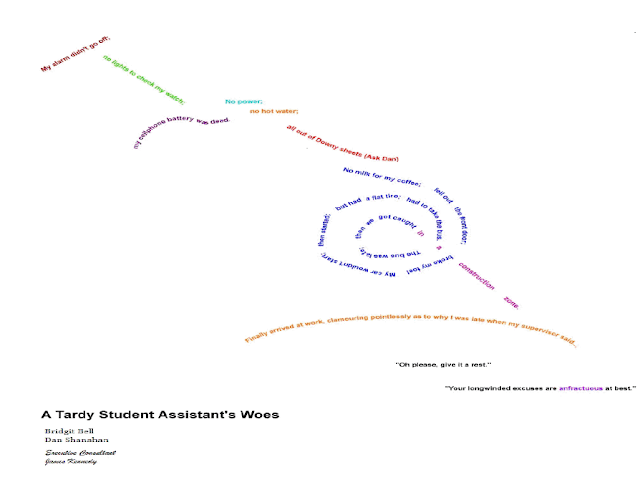 I couldn't figure out how to make it bigger, so here's what it actually says:

My alarm didn't go off;
no lights to check my watch;
my cellphone battery was dead.
No power,
no hot water;
all out of Downy sheets (Ask Dan).
No milk for my coffee;
fell out the front door;
broke my toe!
My car wouldn't start;
then started;
but had a flat tire;
had to take the bus.
The bus was late;
then we got caught in a construction zone.
Finally arrived at work, clamouring pointlessly as to why I was late when my supervisor said...

"Oh please, give it a rest. Your excuses are anfractuous at best!"

(otherwise known as "The Synonyms")

Congratulations to everyone, you all had us laughing hysterically! Keep up the good work!
Posted by The Humble Judges at 3:13 pm No comments:

This Week's Word is: Anfractuous

Posted by The Humble Judges at 7:15 pm No comments:

terpsichore, n.
The Muse of dancing; hence, a female dancer; dancing as an art.

I remember when I first started  at St.  Mary’s
I found it to be a little scary.
One day while sitting at my desk using my eraser
I pretend to be busy because apparently I malinger.

I hear commotion coming from my cubicle neighbour
I turn to see Shannon and Sue the dipsomaniac but also my mentor
In the midst of dancing!  Sue doing the Running man
She interprets the dance the best she can.

Any boss who does the running man without even a care
I knew I belonged at St. Mary’s right then and there
However with moves I’ve never seen before
I thought to myself “she’s no Terpsichore”.

Pardon me.
But did you say,
“Open washrooms on the first floor.”
Seems like they’ve been closed…. a year or more.

Hooray!
It’s time to parrrrrty.
Come one, come all for a little Terpsichore.
I just hope the floor is not slippery.


I obviously need to step up my game
Make a plan
Focus my aim
My footwork is sloppy
The music lacks swish
But that’s in the past
Bring it on Trish!

Make no mistake,
I give her props
But what it comes down to is a
Terpsichore –off

- Sue Cannon
Congratulations Sue!!
Posted by The Humble Judges at 7:14 pm No comments:

This Week's Word is: Terpsichore

Posted by The Humble Judges at 10:57 am No comments: